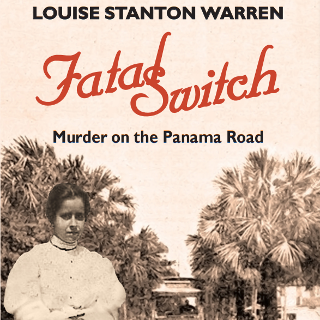 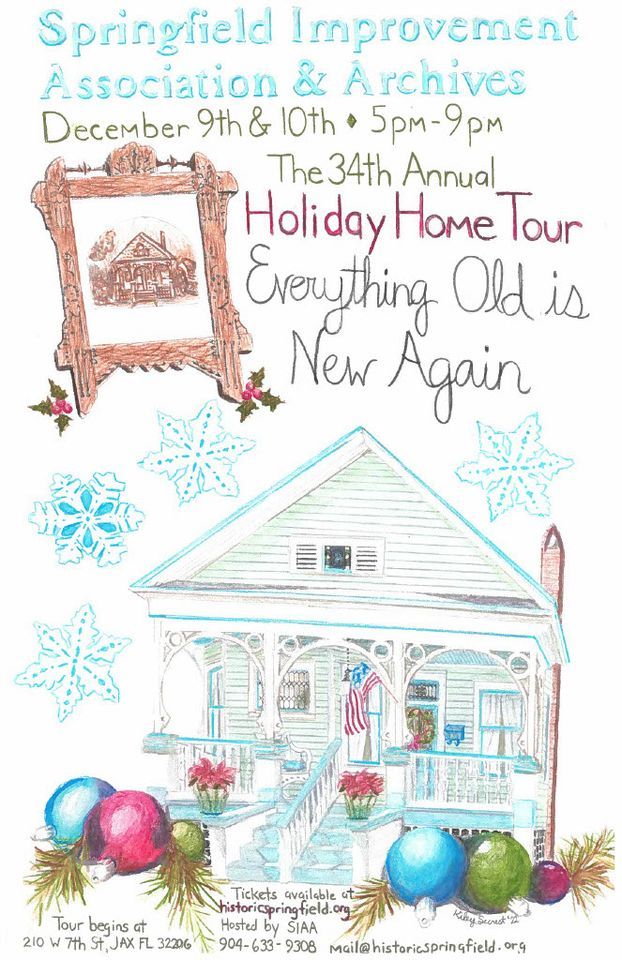 Presented by SIAA (Springfield Improvement Association & Archives).
(Plus, copies of FATAL SWITCH will be on hand if you
want to get some holiday shopping out of the way!)
TOUR TICKETS: $20.00 per person on tour days.
Children 12 and under are free.
Location: 210 West 7th Street in Historic Springfield. 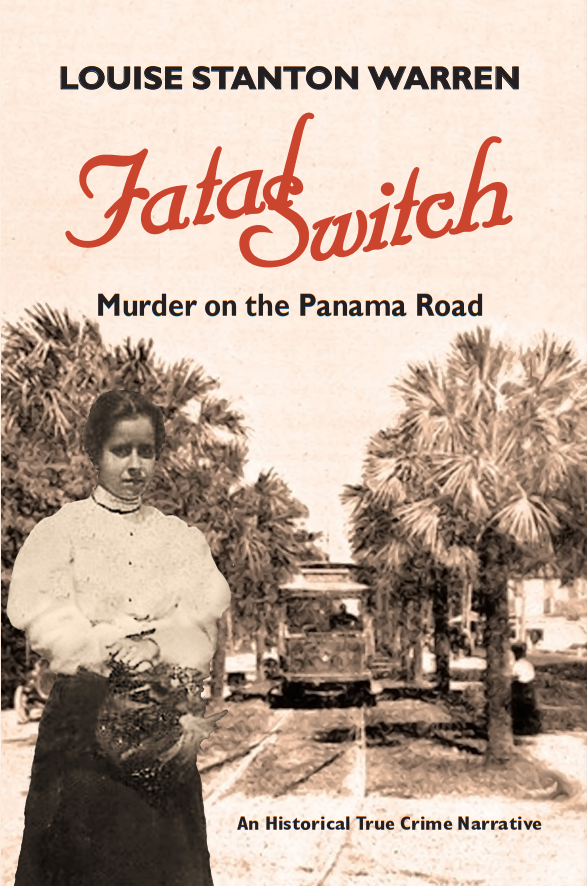 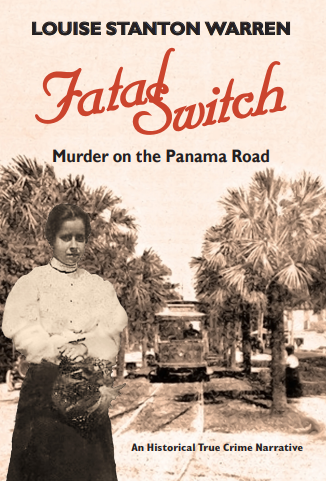 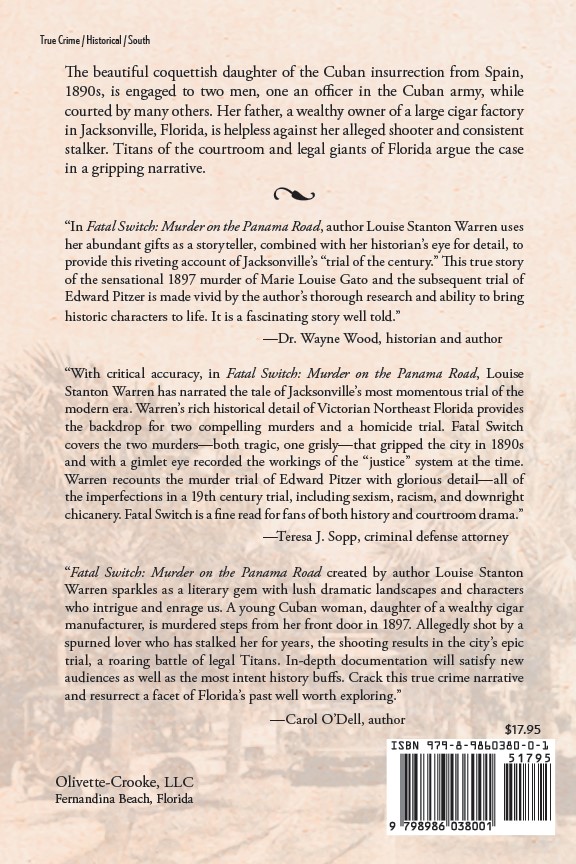 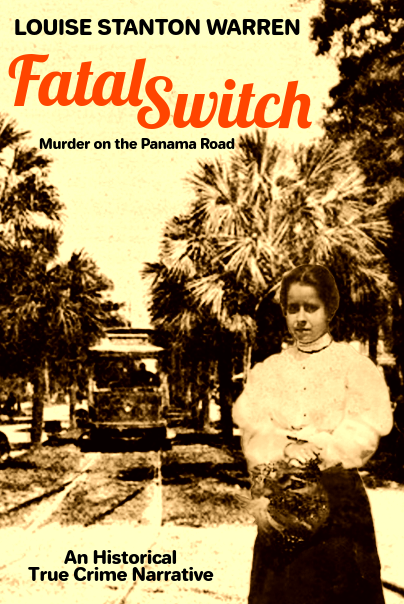 A whipped branch, a whirl of sand. Preternatural silence. As the still before a hurricane, the world watched the day close on the irrevocable, the inconceivable. Only the pealing church bells shattered the quiet and called forth the gathering.

Tucked in the rear of the sanctuary, according to church dictates, the Gato children stood in a double semi-circle by the open coffin. Tears streaked down their cheeks. The older children held the slight shoulders of the smaller ones who stood before them. Gabriel H. Gato, the father, with swollen eyes and tightly pulled mouth, set tight with controlled rage and sorrow, greeted visitors who filed by. Family, friends, and voyeurs, whom no one knew, passed Marie Louise Gato’s silk lined casket uttering sounds of mourning. Enriqueta, the young woman’s mother, lay at home in bed, sobbing into her pillow, clawing at her mattress. From a small chair in the corner, a friend watched over her in silence

Marie’s first cousin, Katy Huau Lorraine, waited in the vestibule to join the family procession behind the small white casket as it moved forward through the nave of the church. Alphonso Fritot, another cousin, waited with Katie until the priest called him to help carry the coffin. Their parents and siblings also stood in the vestibule speaking of nothing much in soft voices.

Finally, the casket was borne tenderly up the aisle preceded by the rector reading the opening lines of the solemn service of the Episcopal Church. The Rt. Reverend Edwin Weed, Bishop of Florida, assisting in the service, indicated the importance and respect afforded this family. The full choir, swathed in flowing robes, also participated.

From his jail cell a block away, Edward Pitzer heard the bells of the St. John’s Episcopal Church tolling the girl's funeral. "It would have meant a lot to me," he said, listening to the bells, “if I could have attended the funeral."

That morning, his mother had fainted at the coroner’s hearing when Georgia, Marie’s older sister, weeping, testified that she had recognized Pitzer two nights before at her front gate with a gun in his hand.

Surrounded by lush dramatic landscapes of Victorian Florida and characters who intrigue and enrage, a young Cuban woman, Marie Louise Gato, daughter of a wealthy cigar manufacturer, Gabriel H. Gato, is murdered in view of her front window looking on the Panama Road in Jacksonville, Florida, 1897. Allegedly shot by a spurned lover who had stalked her for years, the shooting ran on the front page of the New York Times and resulted in an epic trial, a roaring battle of legal Titans, well-known across the Southeast. Days in court demonstrate again and again the abuse of women, sexism, racism, outright lies and downright chicanery that gripped the Southern city and tore its conscience in two.

Fatal Switch recounts two compelling murders—both tragic, one grisly. Nine days after the death of Marie Louise Gato, the second murder of a young police lieutenant, William Gruber, dedicated to finding Marie’s killer, was committed in a nocturnal mauling in mysterious circumstances. Never unraveled, it hangs forever in grotesque and prurient weirdness. People then and now must speculate the outcome of the Pitzer trial had Lt. Gruber not been slain.

Both the killings and the workings of the “justice” system at the time are carefully recorded along with the filibustering operations from Jacksonville in aid of the 1890’s Cuban insurrection against Spain. Marie’s maternal uncle, Jose Alejandro Huau, Cuban born, also a successful cigar manufacturer, headed the Cuban Junta in Florida which provided food, arms and fighters to the island rebellion. Napoleon Broward, local sheriff and future Florida governor, captained his ship, the Three Friends, on the first filibustering mission across the Florida Straits.

An Excerpt from the Book

April 1897. In Jacksonville, Florida, a dusty Southern town, MARIE LOUISE GATO, at her front gate, struggles to breathe, grasps her abdomen and bends toward the ground. In the soft twilight, beside the blossoming jasmine, her cries and the sound of five gunshots float through the open dining room window.

Her family has gathered for dinner. The Spanish American War is heating up and Marie’s relatives are major players sending covert assistance to Cuba. Captain Napoleon Broward, soon to be governor, was the first filibusterer from Jacksonville. It was a dangerous time.

The town embraced a large Cuban population fleeing the Ten Years War in Cuba that had begun in 1868. Marie Louise Gato’s father and uncle owned huge Cuban cigar factories. As many as fifteen existed in the city, but theirs were by far the largest.

The lovely Marie, not yet the voluptuous Latina with full power of her long eyelashes and provocative eyes, might someday have adorned a Cuban cigar box in the traditional style. Her cousin, the bewitching Katie Huau Lorraine, opined that Marie’s features, at nineteen, were still too soft and round. Could she really seduce a man into buying a cigar? In time, Marie could have become the beautiful “cigar girl” of historic dimensions, her portrait surrounded by primary colors and gold medallions. But Marie Louise’s entrancing charms were never displayed on a cigar box. On the evening of April 20, 1897, she collapsed over her knees, quivering with pain, a beautiful girl with .38-caliber bullets in her liver.

Adding fuel to the highly charged atmosphere, nine days after Marie’s murder, Lt. WILLIAM GRUBER, the investigating officer, is bludgeoned to death and left sexually exposed. Gruber’s demise, with the knowledge he has intact, concludes the Gato investigation, leaving the town unnerved.

"In Fatal Switch: Murder on the Panama Road, author Louise Stanton Warren uses her abundant gifts as a storyteller, combined with her historian’s eye for detail, to provide this riveting account of Jacksonville’s 'trial of the century.' This true story of the sensational 1897 murder of Marie Louise Gato and the subsequent trial of Edward Pitzer is made vivid by the author’s thorough research and ability to bring historic characters to life. It is a fascinating story well told."
~ Dr. Wayne Wood, historian and author

"With critical accuracy, in Fatal Switch: Murder on the Panama Road, Louise Stanton Warren has narrated the tale of Jacksonville’s most momentous trial of the modern era—the 1890s, that is. Warren’s rich historical detail of Victorian Northeast Florida provides the backdrop for two compelling murders and a homicide trial. Fatal Switch covers the two murders—both tragic, one grisly—that gripped the city in 1890s, and with a gimlet eye recorded the workings of the 'justice' system at the time. Warren recounts the murder trial of Edward Pitzer with glorious detail—all of the imperfections in a 19th century trial, including sexism, racism and downright chicanery. Fatal Switch is a fine read for fans of both history and courtroom drama."
~ Teresa J. “Teri” Sopp, Criminal Defense Attorney

"Fatal Switch: Murder on the Panama Road, created by author Louise Stanton Warren, sparkles as a literary gem with lush dramatic landscapes and characters who intrigue and enrage us. A young Cuban woman, daughter of a wealthy cigar manufacturer, is murdered steps from her front door in 1897. Allegedly shot by a spurned lover who has stalked her for years, the shooting results in the city’s epic trial, a roaring battle of legal Titans. In-depth documentation will satisfy new audiences as well as the most intent history buffs. Crack this true crime narrative and resurrect a facet of Florida’s past well worth exploring."
~ Carol O’Dell, author

of Mothering Mother: A Daughter’s Humorous and Heartbreaking Memoir, is a PEN Award winner who has been featured on CNN, NBC Miami, Atlanta Live, and the Shriver Report. 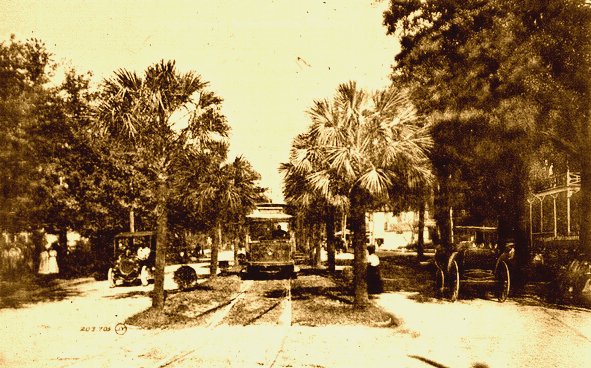 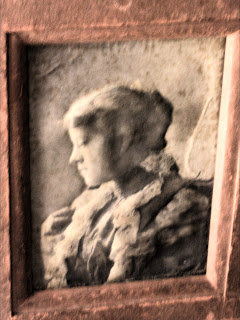 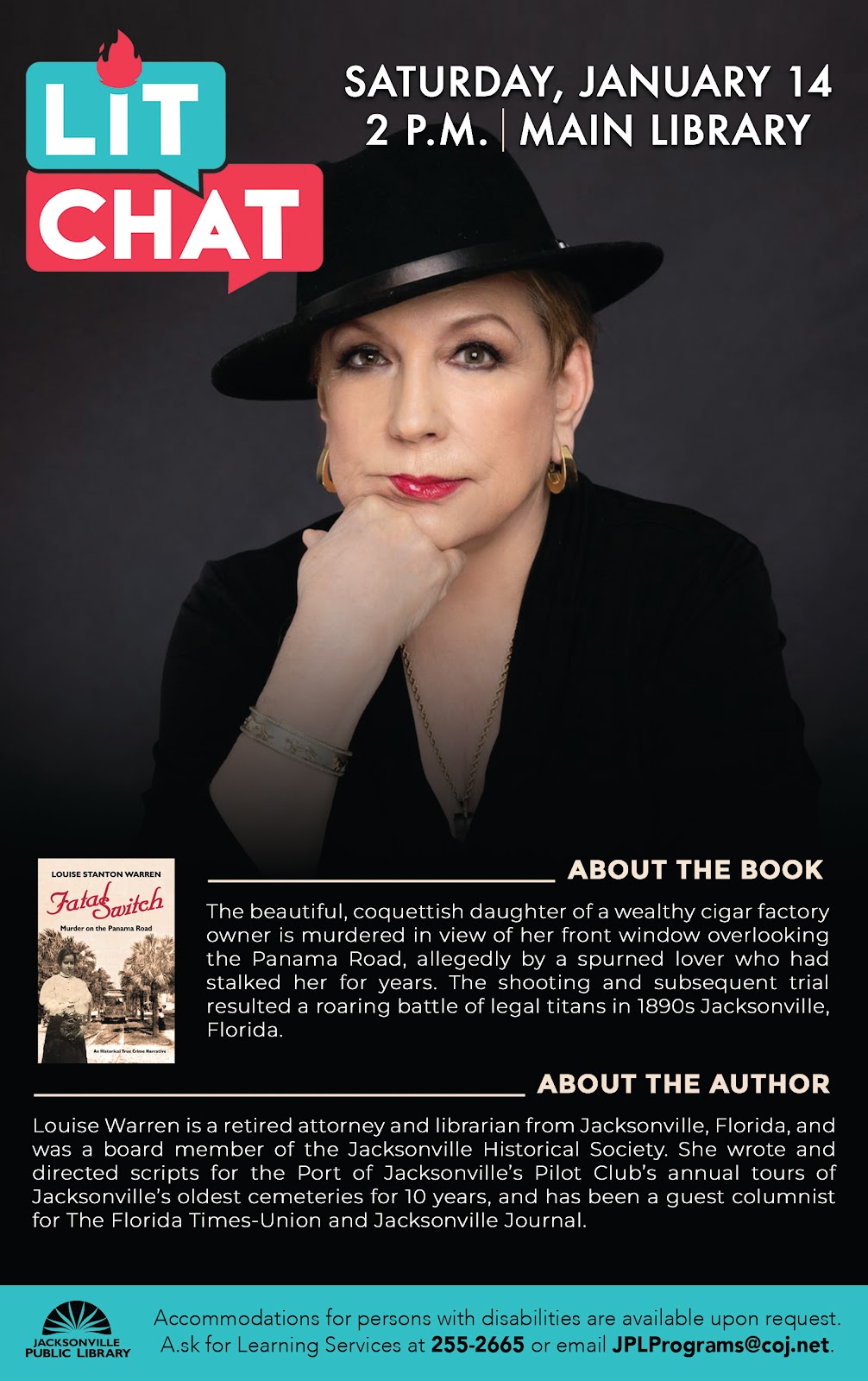 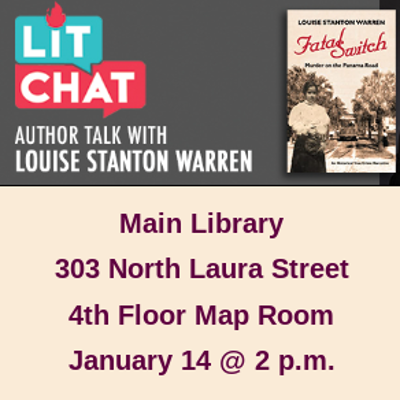 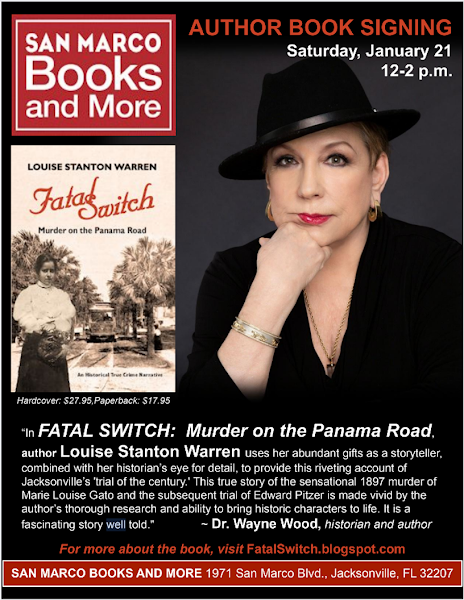 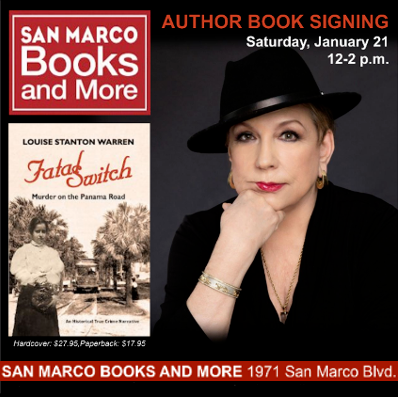 Use your Library card to pre-register for the book talk at https://jaxpubliclibrary.libnet.info/event/7517569
(Pre-registration is not required, but it is encouraged to guarantee your seat!) 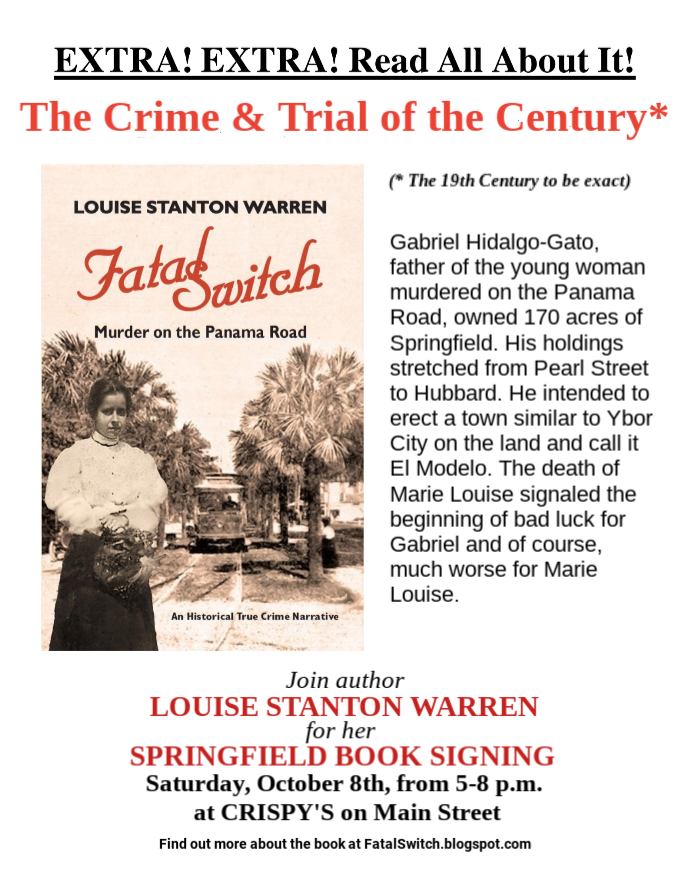 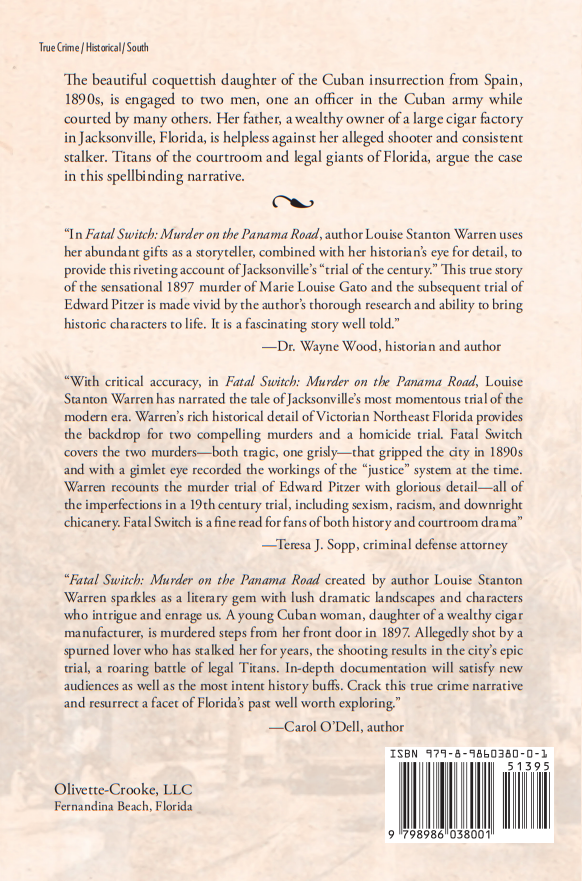 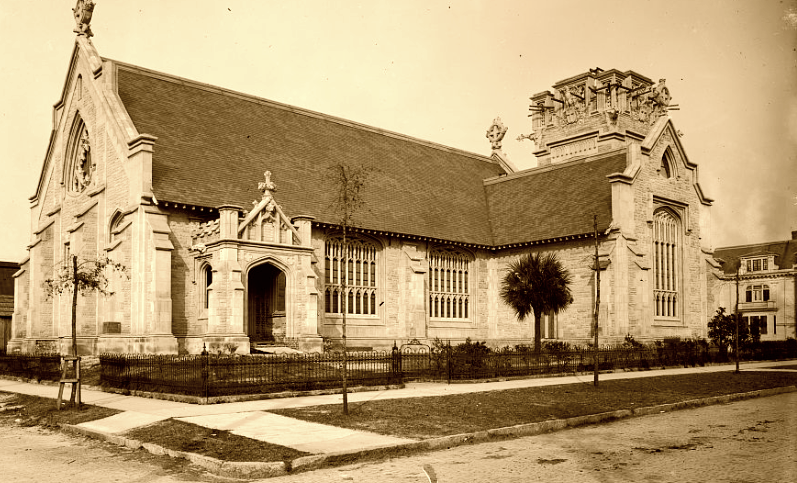 No comments:
Email ThisBlogThis!Share to TwitterShare to FacebookShare to Pinterest
Older Posts Home
Subscribe to: Posts (Atom)
Author Louise Stanton Warren is a retired attorney and librarian who served as a board member of the Jacksonville Historical Society.
Email: Warren2417@att.net

Jacksonville, Florida, 1897:
Surrounded by lush dramatic landscapes of Victorian Florida and characters who intrigue and enrage, Marie Louise Gato, a young Cuban woman and daughter of wealthy cigar manufacturer Gabriel H. Gato, is murdered in view of her front window overlooking the Panama Road. Allegedly shot by a spurned lover who had stalked her for years, the shooting ran on the front page of The New York Times and resulted in an epic trial, a roaring battle of legal Titans. 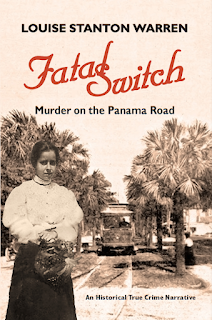